The making of a Taylor guitar – a sustainable and ethical process

PRODUCT roadshows, when done right, can be a great way for a guitar manufacturer to interact with existing and potential customers, who also get the opportunity for a “hands-on” session without a commitment to buy. And what better way to know more about the product than to ask the company representative face-to-face.

A recent roadshow by Taylor Guitars organised by the company’s Malaysian distributor, Bentley Music, was a case in point. Billy Gill, a member of the Taylor Guitars Road Show team and one of the manufacturer’s sales managers, conducts a dozen such events annually, and for this date on Nov 12, roped in the services of a Bentley employee with impressive guitar-playing skills to demonstrate the various tonal flavours of different models. The focus, of course, was Taylor’s current “V-Class”, which features the new “V” bracing that’s making a bit of a buzz the acoustic guitar realms.

Gill, who covers both domestic and international markets, is part of a team of 10 company representatives doing such events for Taylor across various territories. He has been with Taylor since 2010 and was previously with renowned guitar pickup manufacturer Seymour Duncan for 11 years. 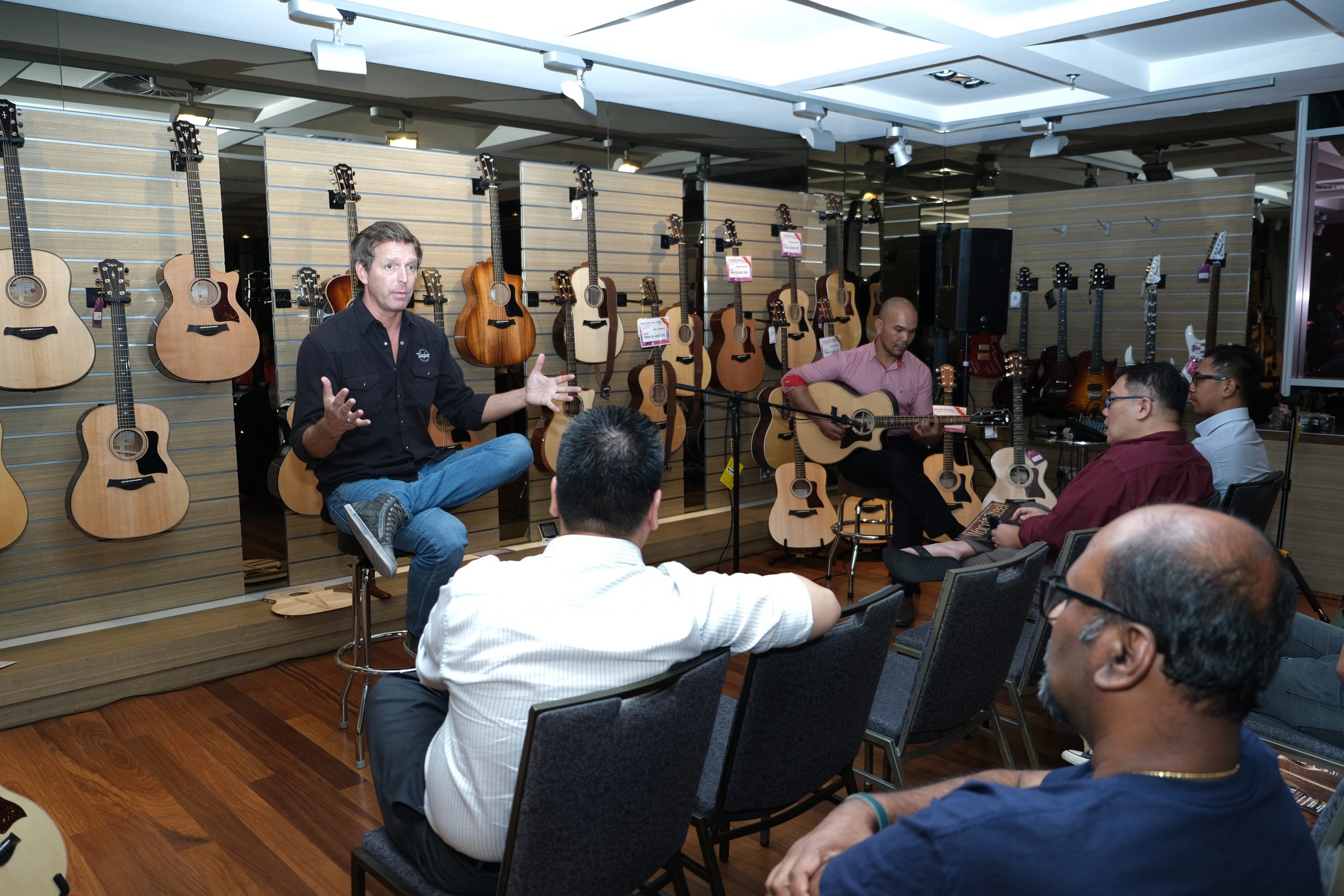 Each demo-ed model was played acoustically, with amplification provided by a condenser microphone hooked up directly the PA system… no participation of the onboard preamp, and no effects or EQ-ing applied in the path. The gathering of Taylor fans was small but appreciative, and one could clearly discern subtle or significant differences in various guitar models because of their body shapes and tonewoods employed. Indeed, this was the underlying theme of the road show – A Presentation of Shapes and Tonewoods. Gill also highlighted Taylor’s new “Grand Pacific” shape (essentially, a round-shouldered dreadnought), which lends a different dimension to the Taylor acoustic sound, such as better clarity in the lows, some warmth and a noticeable increase in resonance.

Taylor uses only solid tops on all its acoustic guitar models, and everything above the “200” series also features solid-wood sides and back. We spoked to Gill about the concept of the road shows and Taylor’s involvement in ensuring sustainable practices. Guitar manufacturers are increasingly becoming aware that they need to adopt sustainable, ethical and transparent policies in the sourcing of their wood, and Taylor Guitars is no exception.

What is the purpose of those shows and what do they achieve?
The general concept in the roadshow is to bring the current catalogue ‘live’. We talk about the shapes that we make, about the tonewoods that can flavour those shapes, and help people, whether they’re going to buy a guitar that night, next week or never, to arm themselves with practical information about what our designs are and why they were made that way.

What is the process followed in developing product lines?
Since the inception of the company in 1974, (founder) Bob Taylor has been at the helm of product development. About eight years ago, we were very fortunate to have (guitar master builder) Andy Powers (who recently acquired a stake in the company) join the team. Bob will be the first one to tell you that Andy is a much better guitar designer than Bob ever was, he’s very young, he’s very talented and he’s making some radical changes to our product line.

Andy comes up with the designs and we wholly back what his vision is. There’s always a trade-off… if Andy had his way, he would build every guitar by hand, but we try to marry that with a production environment. It’s really an interesting dance between the two things.

Taylor has two factories – one in El Cajon, San Diego (California) and the other in Tecate, Mexico. What is the production volume now?
We manufactured more or less 160,000 guitars in 2019 and I’m gonna guess the ratio, in terms of unit volume, about 60% from Mexico and 40% from the US factory. Our biggest market is the US, followed by Western Europe, Japan and China. 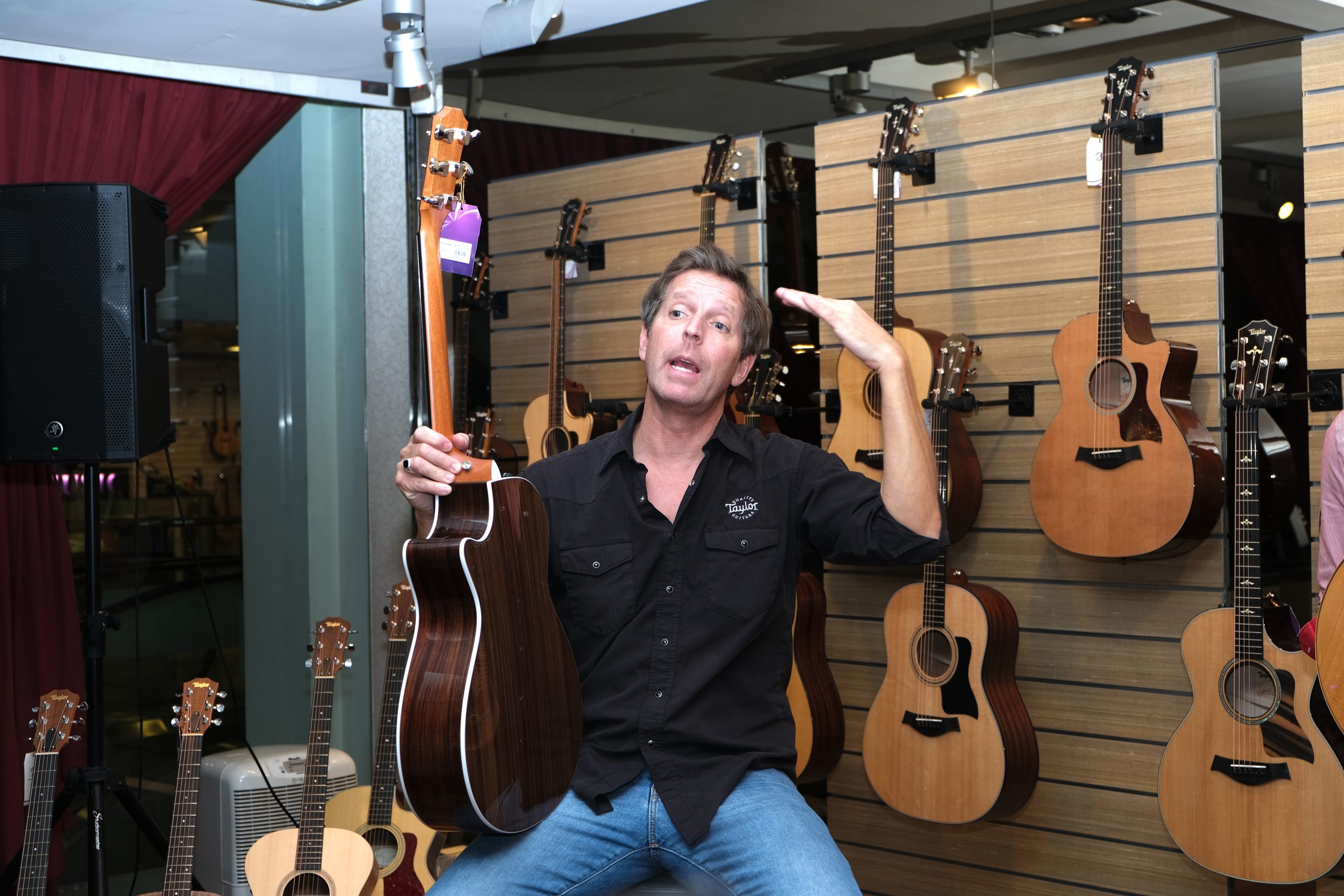 Let’s talk about the ebony fretboard found on all Taylor Guitars. Traditionally, the demand was for jet-black ebony, perhaps due to cosmetic perceptions and tonal myths but its procurement was a highly destructive and unsustainable process. Many trees chopped in this quest were left to rot and die if the wood wasn’t jet-black, leading to a colossal waste of natural resources. While, in recent times, big-name manufacturers have opted for composite materials like Richlite (which is not cheap), Taylor Guitars eschews anything other than ebony. But it’s not the destructive jet-black version; the wood is “marbled”, that is, with lighter streaks (followers of the brand will be familiar with The Ebony Project – in 2011, Bob Taylor bought into Crelicam, an ebony sawmill in Cameroon, to facilitate the legal and ethical sourcing of West African ebony). How long will this be sustainable?
Well, that’s a big question and the big answer is, in 2011, Bob got together with Madinter, a long-time supplier of our layered wood for acoustic guitars, and launched this very ambitious project to go to Cameroon, which is one of the last places in the world where you find ebony, and assume a 75% licensing to take legal ebony down from the forests.

The intent there, and the reason why you see a lot of marbling in the ebony that we use on the fingerboards and the bridges in some cases, is because we’re gonna use every piece of that ebony. I’m painting with very broad brush strokes here but the history of jet-black ebony fingerboards is awful. A lot of trees died in the name of black ebony.

But when Bob and Vidal (de Teresa, Madinter CEO) got to Cameroon and discovered what was happening, the intent was to use everything that the forest gives us and that’s exactly what we’re doing today. So for the foreseeable future, ebony is stable … it looks healthy.

The challenge would be, because we have so much ebony that would be considered scrap wood in the guitar world, to make the company stand up on its own two legs financially by moving outside the guitar industry. To that end, Bob has launched a company called Stella Felone Kitchen Woodcrafts (this year). The first products are a beautiful cutting board in two different sizes that are made of this ebony, they are absolutely breathtakingly gorgeous. And I’ve seen prototypes of salt-and-pepper shakers and ebony chopsticks. So these are the types of industries we need to
expand out to, to get Crelicam running on its own two feet.

Is there a difference between black and marbled ebony, apart from the cosmetics?
Tonally, they’re the same, the density is the same, there’s absolutely no difference in their functionality at all. 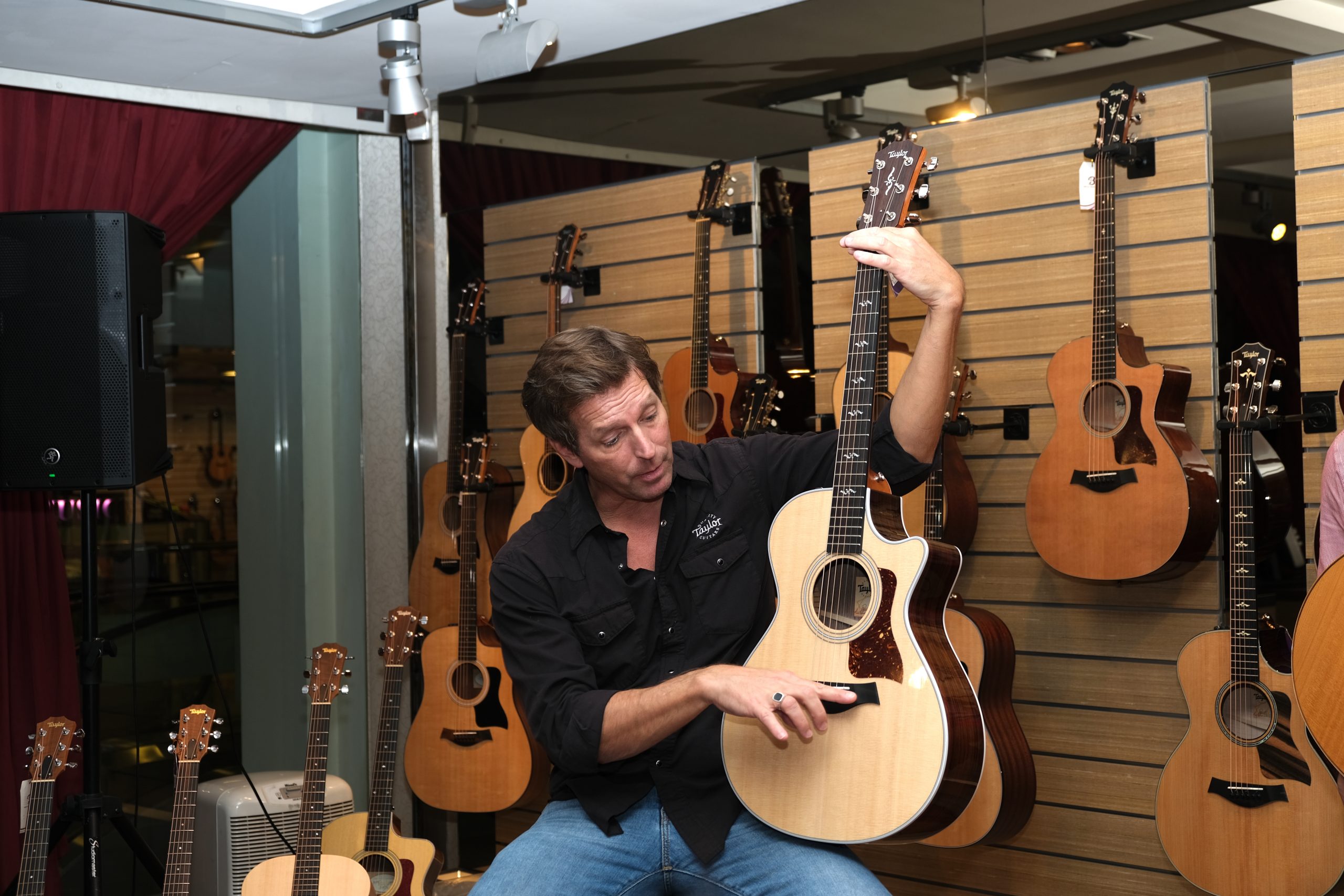 What about the procurement of other woods used to make guitar necks, tops and sides?
As we move as a company, we will always have to move with partners who can provide us sustainable wood, and in some cases, we need to change our product design simply because we feel that there’s a better choice out there and it’s our ethical responsibility to react to that.

A recent example is, on some of the products made in Mexico, namely the 100 series and some of the GS Minis, we have moved from a sapele (African mahogany) neck to a maple neck. Why? The answer is simple – maple is much more procurable from North America – whether it’s the USA or Canada – and in many instances, maple is a kind of a weed in North America, it grows everywhere! So we feel very good about not only its functionality to provide us a stable neck, which is one of the hallmarks of the company, but also it’s easier to get and it has a very healthy future.

What that wood is, becomes the big second question. Good examples (of woods that are procurable sustainably) are Tasmanian Blackwood, which a very bright future and East Indian rosewood. We will always built guitars out of wood, I have never heard a word about alternate materials. What those woods, are remain to be seen. We’re trying to lead the way to adapting to woods that have a great future. We are 100% vested in that.

You can check out the Taylor range of acoustic and electric guitars at Bentley Music.