THEY say the apple doesn’t fall too far from the tree. And giving credence to that ol’ adage is Eugene Lee, a 38-year-old who takes after his guitar making and repairing dad, Richard, a well-known veteran in the Klang Valley.

Senior may have already etched his name in the minds of musicians young and old, but junior is fast becoming a sought-after technician who is not only adept at repairing amps (for guitar, bass, keyboard and PA) and guitar electronics, but is also willing to stick his hands into the innards of classic and vintage keyboards, instruments usually consigned to the scrap heap by most repairmen, be it a Roland RS-09 string/organ synth or Eko EKOsynth P-15 Digital Synthesizer.

Lee is willing to go to the places many technicians dare not, like replacing the wiring harness, Varitone knob or toggle switch on a semi-solid electric guitar, for instance, which are assignments as tedious as they come. Changing pickups, customising switching systems and all other manner of electronics are all par for the course for the former Multimedia University electronics engineering graduate.

In fact, well before he explored the nooks and crannies of gear that contain lethal voltages, he cut his teeth on the basics by operating his school’s PA system, quickly giving in to curiosity which saw him dabbling in DIY electronic kits. 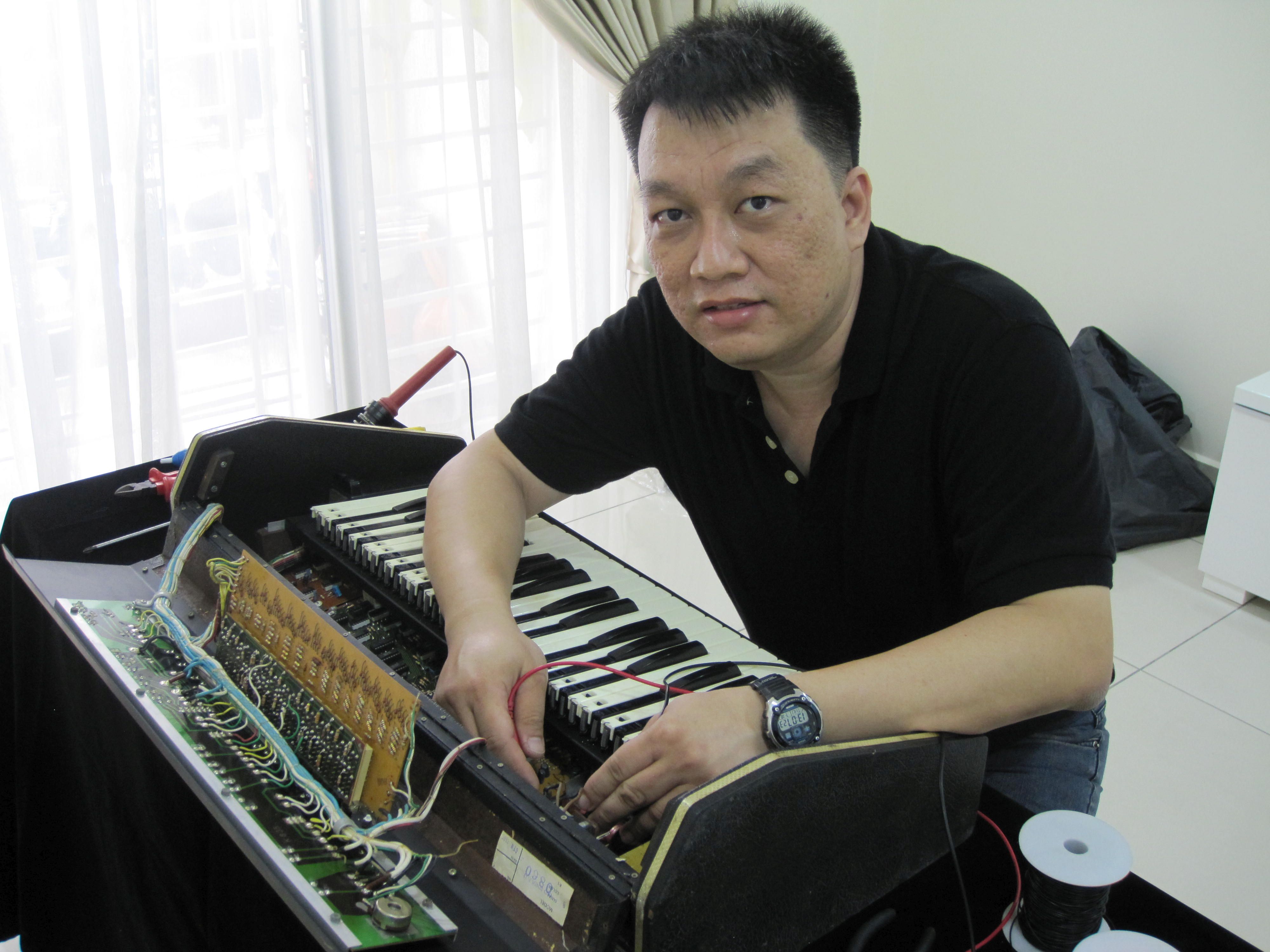 As he furiously bought diodes, capacitors and transistors, he also soaked in the music, not of his time, but his dad’s, which invariably meant the likes of The Shadows, The Ventures, The Beatles and The Rolling Stones… and some Pink Floyd thrown in for good measure. His interest in electronics grew alongside his fascination for the guitar, and the ubiquitous gear of his old man’s time naturally had him gravitating towards Fender Strats and Vox amps.

Embracing a philosophy steeped in the “waste not, want not” proverb, he believes in keeping gear going and out of the growing dump sites of the world. Unless spare parts are completely unavailable, no piece of gear is unfixable to him, so everything can be brought back to life.

What are the most basic repairs you handle? Why these kinds of repairs?
Equipment that can’t be switched on or has crackling noises when the control knobs are turned, due to the equipment not being used for quite a while. Without sounding too technical, electronic components inside the equipment do have a shelf life, so gear needs to be used periodically to maintain their longevity.

What can users do to maintain their equipment (amps, keyboards, etc)?
Use and handle all equipment with care. I have seen vintage amps, keyboards and other equipment that have lasted decades because people took good care of them.

Occasionally, switch on the equipment, turn the control knobs and put them in use, especially if they haven’t been for quite some time.

Keep the equipment in a cool, dry and well-ventilated place as far as possible. For example, don’t place the equipment under a leaking air-conditioning unit because the dripping water might seep into it.

Can you provide three dos and don’ts of handling keyboards and amps?
Dos:
Make sure equipment is kept free from exposure to heat, moisture and dust. These are some of the most basic and devastating elements to any piece of electronic equipment.

Don’ts:
a) If the equipment is faulty, don’t attempt to repair it yourself. There are dangerous voltages present inside, even long after it has not been used for some time.

There have been cases where the user or another person attempted to repair the equipment on their own. Only after failing to do so, they sent it to me. Of course, this was extra work for me because I had to undo their work and only then could I fix the original fault. Obviously, this would take a longer time and cost more to repair, compared to if I had just fixed the original fault in the first place. And in the end, some of the equipment still couldn’t be repaired because too many parts had previously been removed.

b) Abusing equipment, such as turning up the volume too loud, pressing the keyboard keys too hard until they break and more.

c) Placing drinks/food on top of the equipment. Somebody could easily knock them over and spill the contents into the equipment. Not a pleasant scenario at all.

Can you provide a basic checklist of how you go through your repairs?
If the customer knows the problems with the equipment and informs me, then I will have a much clearer picture of what and how to fix it. However, if the customer isn’t sure, I should still be able to find out the problem. I’ll check for outward signs, such as burnt smell and water spills, and if none exists, then I’ll switch on the equipment. If the equipment doesn’t power up, I’ll open it up and look inside to see what’s going on. If the equipment does turn on, then I’ll check its functionality. If there are issues with its operation, such as noises or certain features aren’t working, then it’s time for me to roll up my sleeves and get in there.