HERE’S a question that begs to be asked – why does Godin Guitars’ newest flagship range of acoustics carry the Godin name, and not, say Seagull? For most users over the years, Godin brings to mind electric axes, and Seagull, mid-to-pro level acoustic guitars.

Since Robert Godin founded the company 47 years ago, the renowned Montreal-based Canadian guitar manufacturer has made millions of acoustic guitars under a range of brands – the legendary Seagull, plus Norman (its first brand), Simon & Patrick, La Patrie (nylon-string) and Art & Lutherie. The Godin name has been reserved for its electric and thinline semi-acoustic guitars (like the “A” series and Multiac line), which have won several award for their innovative electronics.

That, however, changed this year when the Godin Acoustic Series was launched, a line-up of six models that carries the names of well-known concert venues in Canada – the Metropolis (three models, dreadnought body), Fairmount (two OM/ concert hall models) and Rialto (parlour).

“It was a big decision,” says Patrick Godin, 50, the founder’s eldest son who now runs the company with his younger brother Simon. Patrick has been with the company for 25 years, managing its international sales market. Since the late 1990s, he has been travelling to this part of the world every year without fail.

“We have several brands, but the brand name for which we do the most marketing and advertising is Godin. And over the years, many musicians and retailers have been asking us, ‘Why don’t you do a pure (Godin) acoustic? You have Seagull and all those brands, maybe you should do something different’…,” Patrick adds. 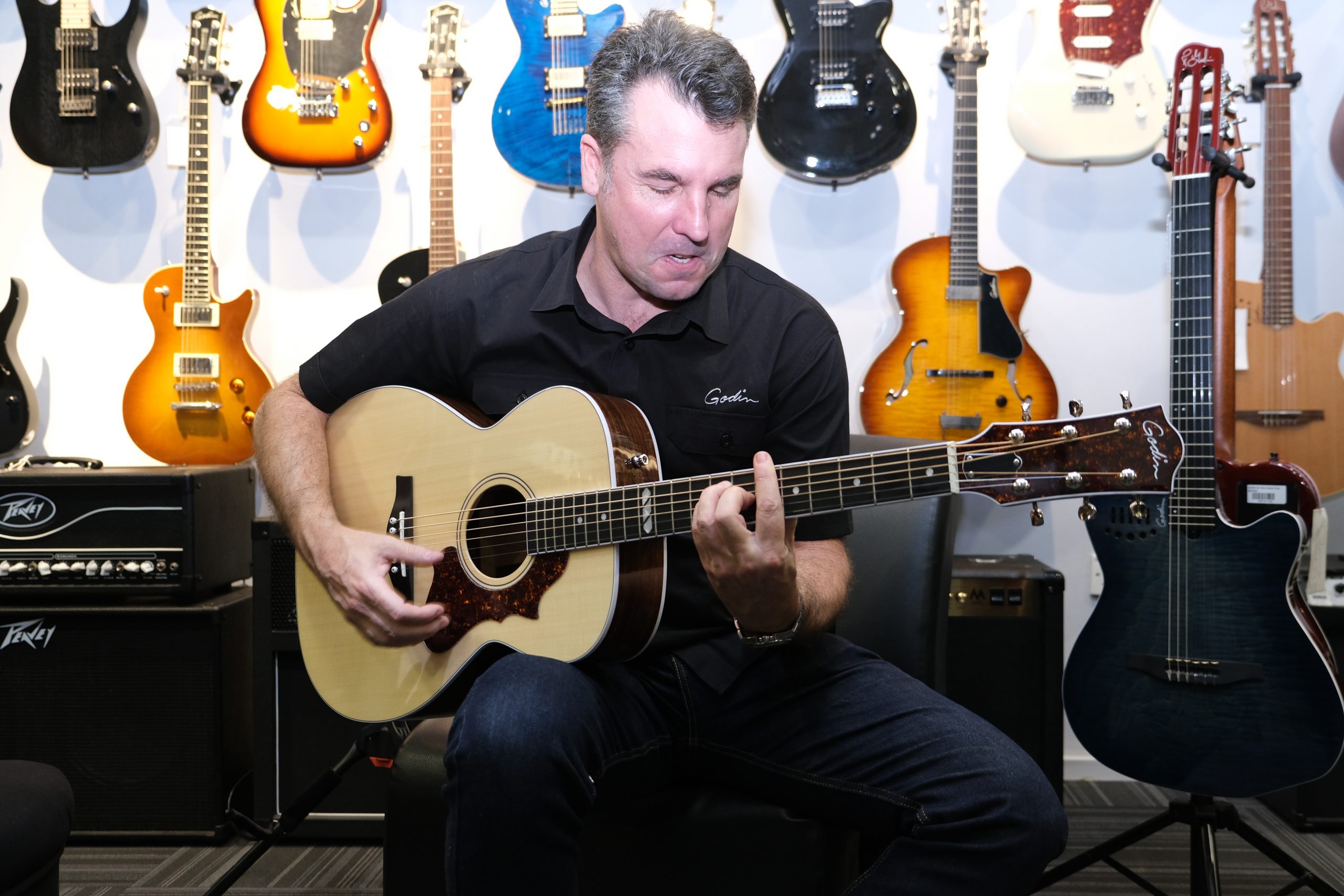 During the past decade, Godin senior, who is 71 and less involved in the company’s daily operations these days, has been conducting research with Montreal’s renowned McGill University.

“My father has many ideas, and he worked with the engineering department and music school… they worked mainly on the lutherie part, for instance, how to select a top. Normally, it would be the tapping, the visuals, the grain and so on, but there’s more to it than that. So what they realised is that it’s all about the flexibility of the top.”

The university has a machine to conduct pressure tests on wood, he added.

“If the top is too soft, it’s no good for the sound. You need to have a very stiff top, so if it was getting to a certain range, they would keep it for the future.

“Last year, when we decided to do a Godin acoustic, it had to be something different. That was one of the first ideas, the pressure-tested top. By having a very rigid top, you can make it thinner (which aids in better tone). Also, our team of luthiers refined the bracing for the new design.

“All those years of research by my father and the team, is in the resume of these guitars.”

The company literature boasts that the Acoustic Series uses “premium tonewoods, select pressure-tested solid spruce or cedar tops, newly developed bracing, stunning inlays and state-of-the-art electronics”… and of course, all the guitars are fully made in Canada (the company has six factories). 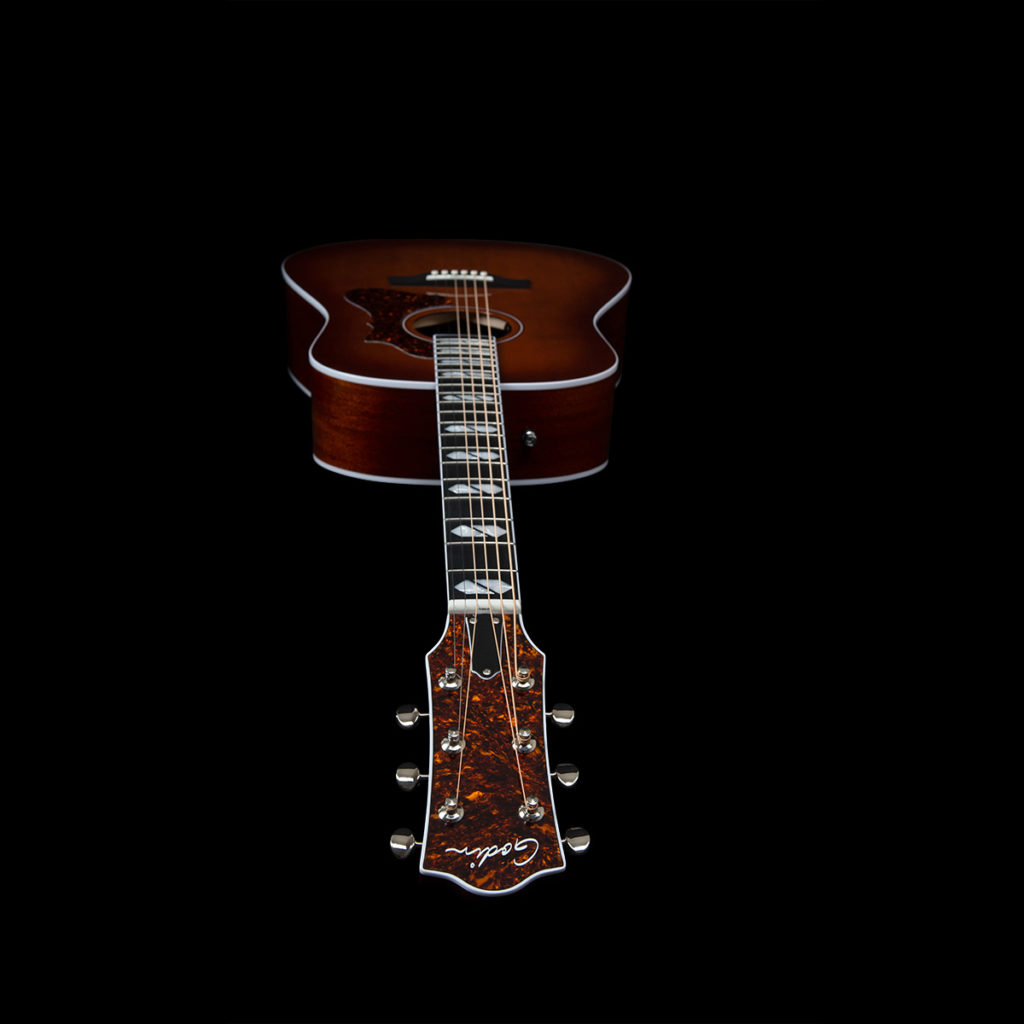 All six models also have fretboards made of Richlite, a resin-infused paper-based composite material that is said to be very durable, versatile and highly sustainable. Big-name guitar-makers, including Martin and Gibson, have opted for Richlite fretboards in some of their models in recent years. More widely, the material, which resembles ebony, is also used to make kitchen counter-tops.

Godin had already employed Richlite fretboards for some of the costlier models in the Seagull, Norman and Simon & Patrick lines, while a number of Godin electrics also use the same material.

“We have many reasons for going with the Richlite fingerboard (for the Godin Acoustic Series). The quality of ebony in general is getting less and less, and also with regulations in the US a couple of years ago, you need permits and it was very restricted.

“Ebony is a very tricky wood to work with… first of all, it takes a long time once we receive it from India. It’s not like you can use it right away, you have to dry it, and sometimes it takes four to five years. Ebony’s biggest problem is that it’s like a sponge. If it is very humid, like in Malaysia, the wood will expand. If it’s very dry, like during like our winter in Canada, it will contract.

“With Richlite, the beauty of it – it can be zero percent, 100 percent humidity, it will remain the same size. It’s compressed paper, it’s not very sexy but this is what it is. It’s like the kitchen counters in your house, it won’t get bigger or smaller!”

Richlite was definitely not  the “cheaper” option, reveals Patrick.

Being harder than wood, Richlite takes more out of the machinery, which would need more frequent maintenance, adding to the cost. 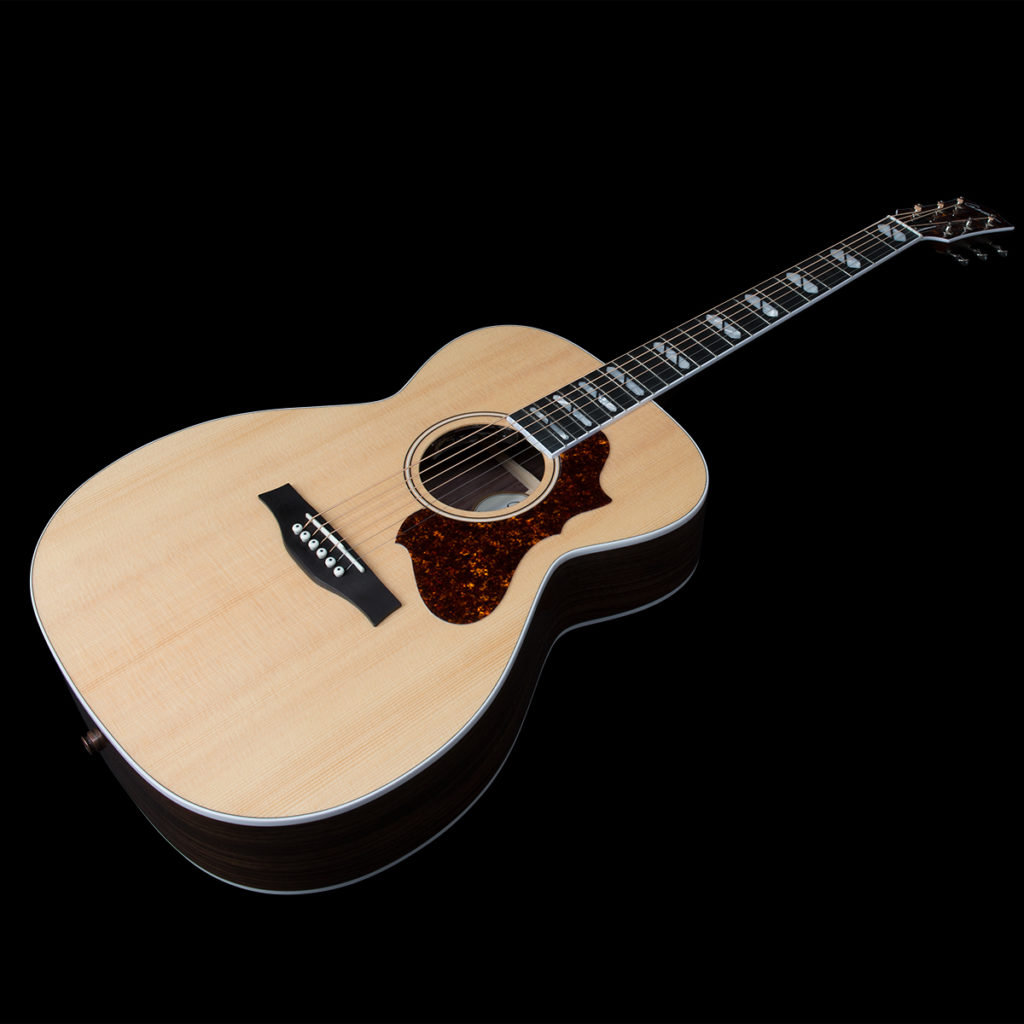 What has the feedback been so far on the use of the Richlite fretboard?

“Nowadays, most of the time when I travel with the guitar and I say ‘Richlite’… it’s not a problem, Two, three years ago, people would ask, ‘What is that’ and so on… so it was like an education. At first, some people said, ‘It’s not natural, I’m not interested’, but those people who said that are the best fans of Richlite now!”

What about the bonding between the Richlite fretboard and neck, which is usually made of mahogany or maple?

“We did many tests with glue for adherence with wood, we didn’t haven any problems whatsoever. We’ve been using Richlite for a number of years now, on the Multiac especially, and so far, we don’t have any returns of an unglued fingerboard!”

The A6 Ultra, A12, Seagull Artistes Series, and higher grade Norman and S&P models use Richlite fretboards… for the regular models, it’s still Indian rosewood.

The Godin Acoustic Series is offered in three body-shapes – dreadnought, OM and parlour. What shaped the decision on the body sizes for these premium acoustics, for which prices start at about US$2,000?

“First of all, the dreadnought is a very common size in the acoustic guitar business. For the concert hall shape, the beauty of it is not only that it’s less bulky, but also a bit thinner. There are more and more females now playing the acoustic guitar and it’s very ergonomic; also for us adult males, it’s a very comfortable guitar.

“As for the parlour size, it has been in fashion for the last 10 years or so… so we have to cover that.” 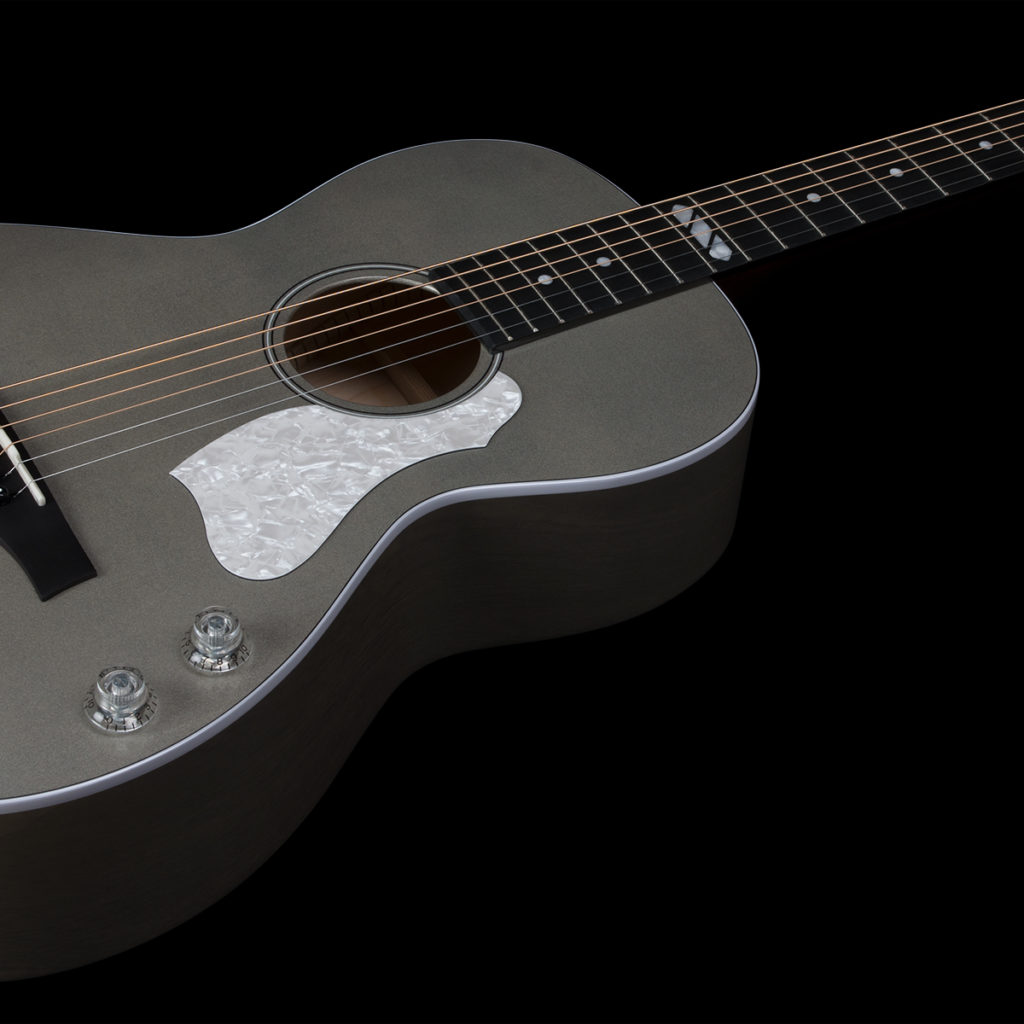 The Metropolis and Fairmount models use the LR Baggs Anthem preamp-pickup system… Godin got LR Baggs to change the covers to black from the familiar cream to match the tortoiseshell headstock layer and pickguard. The Railto uses Godin QIT electronics.

The Godin Acoustic Series guitars sport a 25.5-inch scale length, except for the Rialto, which is a 24.84-inch scale.

Talk about guitar manufacture and the topic often gets into the area of sustainability. Patrick says Godin is conscious of this aspect.

“We have two things in Canada – ice/snow, and wood! We are very fortunate to be a guitar manufacturer in Canada… we have a lot of ice/snow and wood, and population is so small in Canada. We have a lot of trees, but still, we have many programmes for regrowth. We don’t own any forests ourselves but we have many different suppliers and they do have programmes for regrowth of all the materials we use.”

The Godin company, in total, employs about 600 workers, of which around 30 are part of its custom shop. The company now turns out around 300,000 instruments a year, according to Patrick.

Finally, what are the three standout qualities about the new Godin Acoustic Series models?

“One, playability. Two, sound… and aesthetics, the first attraction. My father said in the past, we always thought that the sound will be the key factor in choosing the guitar but it’s the visual. We have to attract the consumer first, and after that, it’s the sound.”