BOSS’ DS-1 is an iconic pedal, and since its introduction in 1978, has featured prominently in the arsenal of many a guitar legend. It’s built to be bold. To be ruthless. To take no prisoners.

That doesn’t mean you shouldn’t invest in the DS-1. Far from it. In fact, Fuad tells us that despite the knocks and nicks, he still has total faith in the BOSS classic. 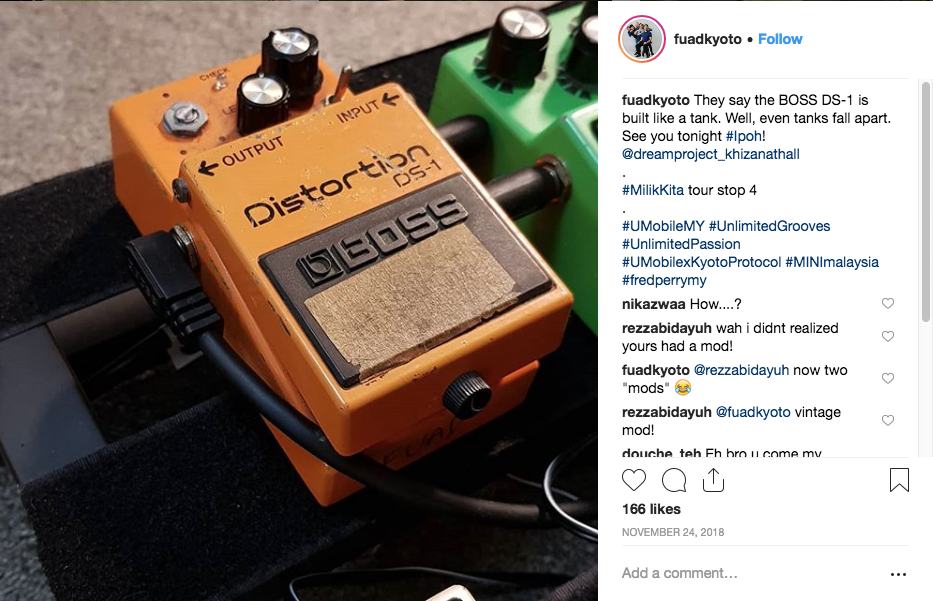 You posted a pic of your bruised and battered BOSS DS-1 before Kyoto Protocol’s gig in Ipoh last year. What happened?
Well, the whole Tone knob got completely severed from the rest of the pedal! You can’t trust the airlines with your sensitive luggage anymore. Luckily, there is a teeny weeny bit of metal still sticking out, which allows me to carefully tweak the tone settings which, as any DS-1 user knows, can make a world of difference to the sound. On the bright side, I don’t have to worry about losing the tone setting in the future. I’m not taking it off my pedal board anytime soon. It adds character!

The funny thing is the DS-1 (and most other BOSS pedals) are known for being built like tanks. Clearly, from my experience, you can see that even tanks fall apart… eventually.

Tell us about this particular DS-1. Was it your first, or one of the many you’ve used over the years?
This DS-1 was my second distortion pedal. The first was a DOD Death Metal Distortion which, in my opinion, is a terrible pedal. What kind of distortion pedal has no Gain knob? After realising the folly of my ways, I decided to go with the tried and tested DS-1. After all, even Kurt Cobain used one… how wrong could it go?

It was definitely not love at first sight. It makes a very abrasive sound on solid state amps.

There were two distinct moments that led to this pedal becoming a staple in my setup. The first happened when I was hanging out in The Guitar Store in Desa Sri Hartamas (as I usually do) and I saw that they had a modified DS-1 in the store. I tested it and it was mind-blowing! Apparently, an industrious local chap had been making his own version of Keeley Seeing Eye DS-1 modded pedals. After trying one, I immediately brought over my own to get the treatment. Two, it was not until I got my first tube amp, a Marshall JCM 2000, that I found a combination that fit like a glove. For my ears, it was a better sound than the amp’s own gain channel.

There was no looking back after that! It’s been a featured sound in a lot of the earlier Kyoto Protocol stuff e.g. Pussycat, and is integral to my lead tone. I must say not 100% of the credit goes to the modded DS-1. A big part of that was also due to using a Maxon OD-9 overdrive pedal in front of it. I generally use the OD-9 as a base tone, and engage the DS-1 to get some soaring leads.

You seem to love BOSS pedals. Do you still have three Digital Delays on your pedal board? I mean, I’ve heard of being obsessed but three of the same?
Do I love BOSS pedals? Generally, yes! Why did I have three Digital Delays? Basically because I was lazy to change the settings for live shows. I have three modes that I utilise: slapback (think the chorus of Gimme Nothing); triplet delay and looper. The DD-7 used for looping often doubles in function as a very short delay that makes it sound like a doubled guitar track. It’s a trick that I learned from a guitar tutorial on how to play Ozzy Osbourne’s Crazy Train.

However, I’ve now splurged on a Strymon Brigadier so that I have tap tempo capability and only need one delay pedal in my setup.

What’s the one pedal you can’t live without?
The one pedal that I can’t live without? Technically, I can live without all my pedals. At Good Vibes last year, my pedal board gave up and I had no sound midway through song number four of seven. Luckily I was using my Telecaster with the humbuckers so I had a lot of headroom with the hot pickups and I was running through a Vox AC30. So all I really had to do was pump up the gain on the amp, and roll down the volume knob to get my OD-9 tone. Some songs did miss the delay effect, which I use a lot of on The Pen Is Mightier, especially on The End, but you can mimic the sound with the picking patterns.

Moral of the story? Be familiar with how to use a good amp and a good guitar, and the pedals can come in later to make your life easier.

Get a taste of Fuad’s tone in this official video of Pussycat (used with permission from Kyoto Protocol):

Pedalling on a tight budget
Molten Lava for your travels