Gerard Singh – master of many

ANUGERAH Industri Muzik nominee, Billboard-charting artiste, jingle maker, award-winning pub musician… Gerard Singh has been many things in the course of almost three decades in the music industry and the singer-songwriter tells us that as he gets older – Gerard turns 52 this year – he’s determined to do and accomplish even more.

Gerard currently plays the pub scene five days a week as both a solo musician and bassist with The Union, a band that performs cover versions of music from the 1980s. And when he isn’t doing that, you’ll find him busy working on new original material, which he hopes to release before too long. 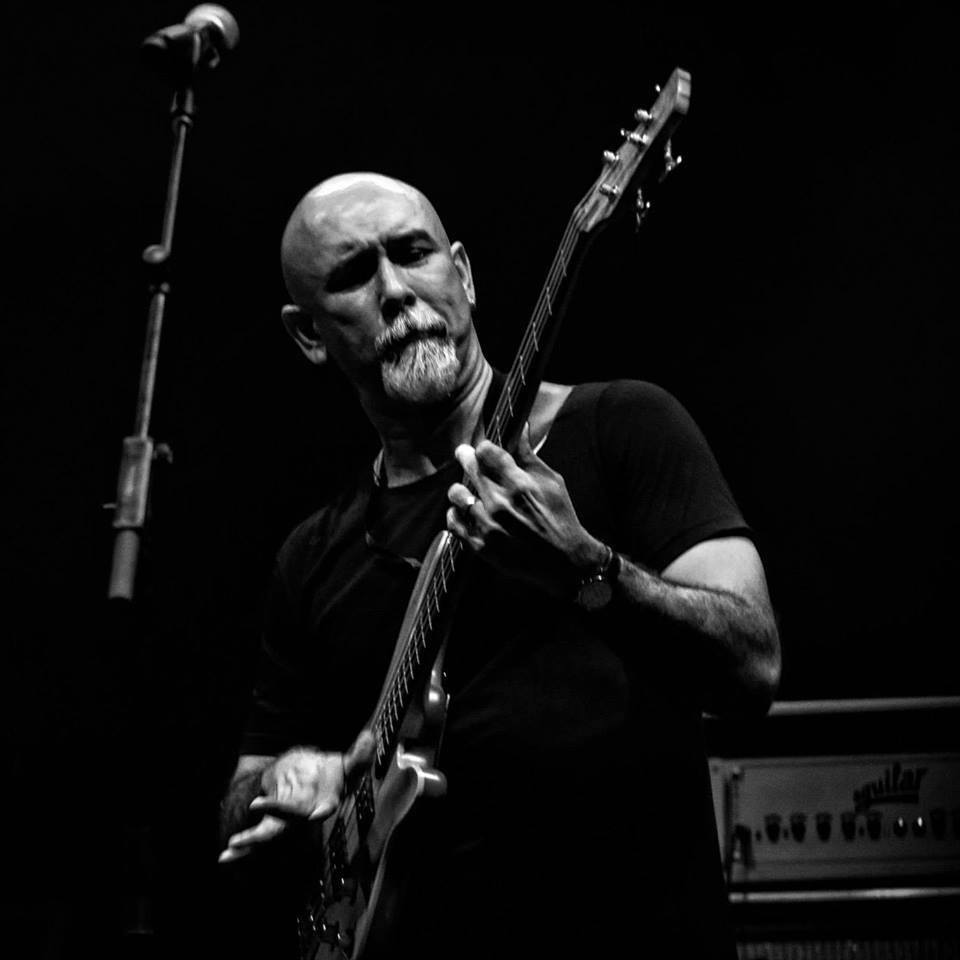 Hey Gerard, as a guitarist, what’s your go-to axe these days?
My workhorse is the Godin Multiac Jazz which is out of production. It’s almost like an archtop with F-holes, and it’s semi-solid. It has an electric neck pickup and piezos in the bridge. I have three outputs – the actual electric output, an acoustic one for the piezos, as well as a GK 13-pin output, which I hardly use, I admit. I have a Roland GR-09 guitar synth which can be paired with that, but I hardly use that. I’ve had the Godin for about 16 years now. It still looks great. The only wear and tear is behind the neck. I love the way it sounds. When I use the electric neck pickup, for example, with a little distortion, it sounds nice and tight and very woody. Some people may find the sound somewhat muddy, but that’s the sound that I like. I’m not into that brittle distortion sound. I’m more into the pre-telecaster Robben Ford kind of distortion.

What about when you switch to bassist mode? What’s your instrument of choice then?
With The Union, I use a Yamaha BB five-string and a Zoom B3. The Union does strictly ’80s music so sometimes I’ll need to have like a fretless sound, a synthy bass sound or even a slightly distorted sound for some of the rockier stuff. The Zoom definitely beats bringing two or three guitars to work. Actually, that’s the reason I like the Godin, too, to be honest. Instead of carrying an acoustic and an electric, I can have both with the Godin. But of course, it’s always a compromise when you do that. 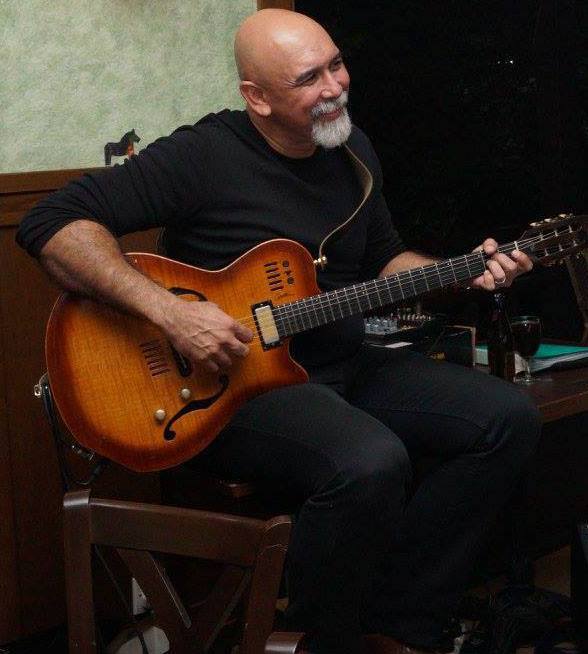 You mentioned Robben Ford. Is he a major influence on you as a guitar player?
Oh yeah. I discovered him quite late, like in ’97 or ’98. I wish I could say I play like him but he inspires me quite a bit especially with his chord voicings. He’s not a traditional blues player. There’s a lot of jazz fusion in what he does. And that’s the way I tend to approach my guitar playing.

Who were your guitar heroes back when you first began playing the pub scene?
Oh, back then I was a strictly acoustic guitar player. My heroes then – and even now – are guys like James Taylor, Crosby, Stills and Nash and Gordon Lightfoot. Taylor was a big influence on me as an acoustic guitarist. I probably wouldn’t have known how to use the capo if not for Taylor. I was trying to figure out Fire and Rain for ages until it hit me that he probably used a capo. As for electric players, I was listening to Joe Satriani and guys like that but even though I loved Satriani, he didn’t make me want to play electric guitar. Then Stevie Ray Vaughan died and I realised I’d never heard his stuff before so I bought In Step and that album made me want to play blues guitar.

Did you only start playing the bass when The Union was set up?
Actually, to be completely honest, I started playing bass as a kid in church. Some kids were starting a band and initially they asked me to play guitar. But then they found someone who was a little bit better, so I was relegated to playing bass. I was a pretty decent bassist at 16, but I always also played the guitar as well on my own. Then after college, I got a job offer to play solo, so I naturally moved to the guitar and gave up the bass. When we started The Union nine years ago, the band setup was supposed to be two guitarists, a keyboardist and Ridzuan Hamid on vocals. But I felt it was a bit redundant having two guitar players since we were doing ’80s music, so I said I’d play bass. And I quite enjoy it now. In this phase of my life, I like the variety I currently have. I play bass with The Union, and I do solo and trio gigs… it helps break the monotony, especially when you’re working so much.

As far as bass players go, who inspires you?
When I first started playing bass, I was listening to Mark King and guys like that but if I have to pick a favourite bass player, it would be Louis Johnson. There are many good bass players currently, but Johnson will always be No. 1 to me.

What piece of equipment couldn’t you live without?
Definitely the Godin. I recently had some trouble with it and had to send it in to the shop and I used another guitar in the interim. It was like playing without an arm. I’m pretty sure that any guitar I use for a long enough time will eventually sound like me. The thing is, it will take a while ’til that happens. 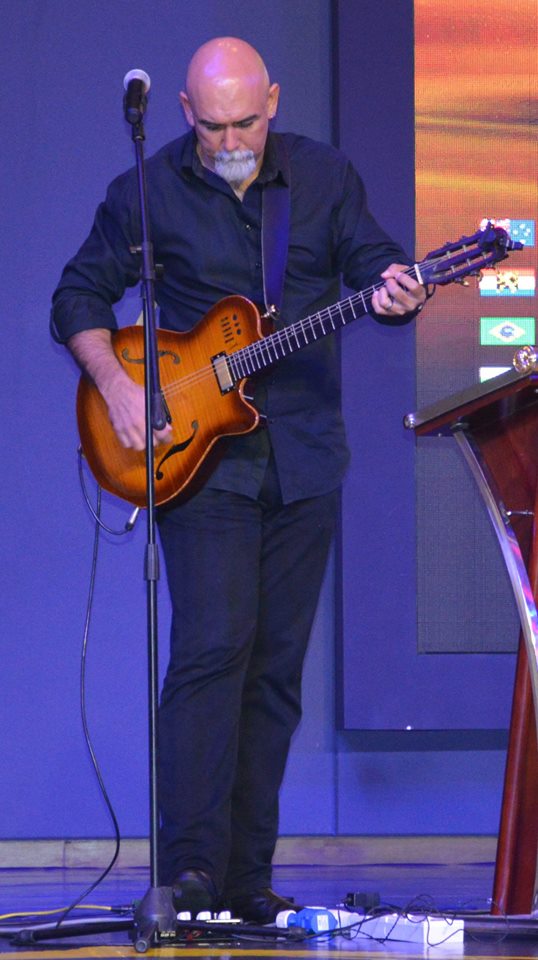